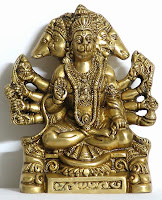 Vyam Vedvyasaya Namaha
Sri Gurubhyo namaha
Sadagamaikvignyeyam samateetksharaksharam
Narayanam sada vande nirdoshasheshasadgunam
Why only vedas should be considered supreme authority?
Sadagamaikvignyeyam :
Bramha can only be known through Vedas .The word sadagama refers to vedas , pancharatra , moolramayana , and mahabharata and purana and other treatises which are in sync with the above.
For every work the anubandachatushtaya must exist. what are they
1. vishaya (subject of enquiry) 2.prayojana ( goal) 3.sambandha (relationship between previous two) 4.adhikarin (follower)
here 1.Narayan is the vishaya , 2.knowledge of Narayana and attaining liberation(Moksha) through this knowledge is the proyojana. 3.sajjana -all good souls are the adhikarin and relationship among these is 4.sambandha.
Vedas declare themselves as supreme authority in conveying Narayana.
some statements are:
"He who does not know Veda etc sacred scriptures will not be able to comprehend the Supreme Who possesses infinite auspicious qualities and is all pervading . Veda teaches on to attain Moksha" -------- Taittiriya Shruti
"The Knowledge of the Supreme cannot be obtained by Logic nor can it be removed by logic if already obtained . This knowledge when imparted by competent teacher leads to Vision of the Supreme" --------------------Kathak Sruti
"Nor the senses nor the inference can help comprehend Bramha , Vedas can alone enable one to comprehend HIM"----------------Pippalada Sruti
Vedas are not compositions of any individual. ie. They do not have an author.
Let us examine this statement.
Vedas as recited by learned in kashmir and the one in Kanyakumari or somewhere in Assam/ bengal or far west in Gujarat will be same. There will not be any disagreement with the vedic passages among these scholars though these scholars might never have met each other .
And all these scholars unanimously accept that there never was an author to these passages and they have been handed down revealed from time immemorial from father to son / guru to shishya etc.
In this world of copyright every single piece of useful info is patented and meticulously assigned ownership to author. and least to say how many cases are being fought in the name of royalties to known algorithms. sometime stolen or copied from others.
In such a practical scenario a content with enormous value to human being has not been claimed authorship definitely augments the case of non composition by the Humans.
But some people argue there cannot be single statement which is not composed by a Human.
Let us explore a bit more ;
The society needs moral laws . There has to be code for Dharma Adharma etc. These laws are beyond sense perception and are accepted by all religious philosophers and thinkers.
If anyone says my philosophy has nothing to do with dharma adharma , then this teacher is without any subject and a purpose. Because if people believe there is no dharma adharma, then they will become aggressive and calamity will befall society. in such situation any harm done to very teacher himself will not be considered wrong . whats' the use of such teaching which brings no good to teacher himself.
But at the same time a person cannot claim complete knowledge of dharma adharma all by himself without drawing authority from some source. else he will have to postulate many attributes like non ignorance and non deception etc unto himself. Ignorance and defects of death and birth and diseases are seen everywhere . so such a postulation is not observed in the real world. Hence concepts of dharma adhrama etc should come from a source that is not composition of individual or humans.
On the other hand if this is accepted nothing has to be postulated to accept vedas as source.
Vedas are self evident ( svatah pramana)
Knowledge is registered in our system , this is cognition.
what is validity of cognition?
A true knowledge /right knowledge is self evident!
i take a hot water bath , i feel 'hot' do i need anything else to validate this feeling of HOT!
it is self evident .
On the contrary a faulty cognition requires another agency to validate it being faulty. sometimes through inspection. Hence scrutiny is required only for invalid cognition . Valid cognition does not require validation.
Vedas are self evident its only the mind/ due to faulty thinking finds fault in it . scrutiny is required to remove certain faults of thinking (ie invalid cognition).
Vedas are eternal
Finally in sanskrit akshara ( a aa e ee u uu etc ) are eternal . they are neither created nor destroyed. sequence of these aksharas are also fixed they are not formed as a probability.
These sequences are sentences which are of fixed nature . they exist in the mind of GOD. These fixed sequences are what known as Vedas. They are revealed to the seers sages in their penance.
Sound(shabda) syllable(akshara) is the manifested in space(Akasa) -is well known. hence it can be seen .Thus this revealed knowledge is self evident because they are imperishable and covey only truth because of their impersonal nature due to lack of authorship.
Narayana is the chief purport of Vedas he is above living(jeeva) and non living(jada) being and conveyed only through Vedas - Sadagamaikvignyeyam.

Posted by chiraan at 8:07 PM No comments: 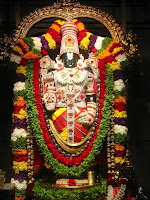 Vyam vedvyasaya namaha
Srigurubhyo namaha
Abhramam bhangarahitam ajadam vimalam sada
Anandatirthamatulam bhaje tapatrayapaham
Who Am I ! Who is Creator! From where does this beautiful world surrounding us emanate?
This solicits enquiry.But mere enquiry can it solve this inquizitiveness ?
What are essentials of finding Truth?
To begin with let's start with our own body.
AM I This Body? We all say this is 'my' "hand" This is 'my' 'face' This is 'my' body'
This 'my hand my face my body' points to the fact that 'I' am different from ' hand , face body etc' ; 'I' am essentially seperate from 'Body' (deha) .
Am I 'mind'.
No because we say my 'mind' is wandering when mind is irrestive and dont say I am wandering.
so 'I' is different from the 'Mind'(manas)
AM 'I' SOUL
yes very word 'I' suggests individuality (Aham Atma)
where is this Soul . How to accept its existence.
Truth can be ascertained in three ways
1>By perception through five senses/sense organs( Pratyaksha)
2>By logical inference (Anumana)
3>By Scriptures
Let us analyse each for whether they can reveal ultimate Truth.
1> Sensory perception : it is knowledge acquired from what we see , hear , feel , taste or smell.
but not every time what we see does end up in reality. because it is well known that human being is subjected to illusions. for eg. a man with colour blindness might see red as some other colour . so his knowledge of what he sees is incorrect. Also due to imbalance of tridoshas( bile phlegm and wind ) in the body gives rise to false tastes and touch. So it can be concluded that correct knowledge cannot be ascertained through sense perception alone. When delusion exists with knowledge of sense objects in the matters of worldly objects then least can be said about enquiry into existence of Bramha , Soul etc. through sense perception ie. Pratyaksha alone.
2> Inference (Anumana)- Certain knowledge can be obtained with application of logic.
say 'Sun is Hot' , no one till date has touched sun but it is indisputably agreed that 'Sun' is hot.
because rays of sun on a summer mid day can reign in curfew like situation in every city known for soaring temps. If rays of sun can creat such heat so sun must be a hot .
But can we rely solely on the logic for knowing Bramha , Atma etc. completely.
consider this . there is smoke coming atop a hill . 'there must be fire on the hill'.
Not every smoke speaks of definite existence of fire.Logically it can be endlessly argued on account of both pros and cons.So anumana cannot alone establish Bramha Atma Srishti etc .
3> Scriptures(Agama) :
Scriptures are of two types 1> wriiten by humans 2> unwritten scriptures.
when we are all in school we are given a text book and we mug it up to write exams . we get 1 st rank second rank etc and rejoice. little do we doubt that what is being taught to us ,' whether it is right or wrong'?
we take it for granted . For most of educated many ,Science exists because it is taught in text books. We grow up thinking high of 'Newton' only to be told that his theory was faulty and classical mechanics is replaced by Quantum in post graduation. Then stephen hawking walks in one fine day and declares all we were thinking that was right untill now was far from truth.
where are these scriptures taking us? Can it be relied upon.
We see a film and get thoroughly influenced by it whereas it is a just a directors' / writer's viewpoint and not absolute truth.Hence all the written material about God creation by a human agency cannot be accepted as ultimate 'TRUTH' because it has a human agency . Every human agency has a defect known as Birth and Death. it is imperfect .
IMPERFECT Cannot give rise to PERFECT.
So only unwritten scriptures can give or convey ultimate TRUTH.
Bramha is the ultimate TRUTH to be known by the souls.These unwritten Scripture is known as VEDAs.
Conclusion: Bramha is said to be Adhokshaja in Vedas ie. one who cannot be known through perception and logic . 'Pratkyakshaanumanaatit'-Adhokshaja.

in the next post we will see , why veda is unwritten , how it is ultimate authority why it cannot be disputed.and what vedas say about Bramha

Your Questions My Answers

chiraan
Bangalore, Karnataka, India
A humble bramhin learned enough to present the teachings of upanishad by the grace of my Guru and sri Narsimha